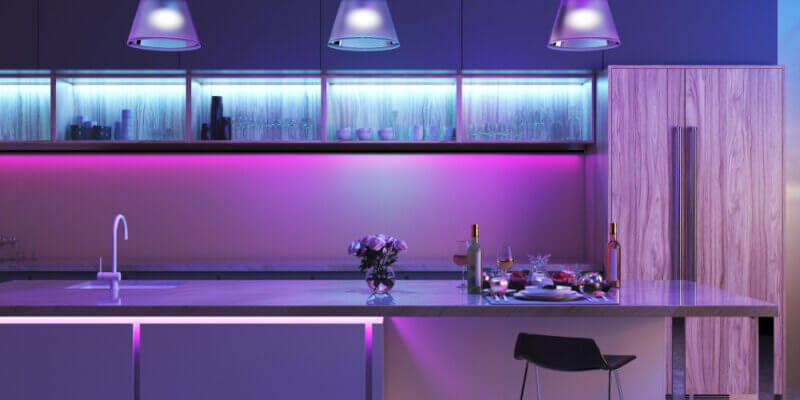 Light-emitting diodes, better known as LEDs, are ninety percent more efficient at light production than incandescent light bulbs. That is because LED lighting works by passing an electrical current through a microchip. As the current passes through the microchip, it illuminates the tiny LED light which produces the visible light. The absorption of its heat prevents performance issues of the LEDs lighting into a heat sink.

LED lights do not “burn out.” Instead, they experience “lumen depreciation” by their brightness slowly dimming over time. For this reason, the lifetime of the LED lighting is based on a prediction of when the output of light will decrease by thirty percent.

Now that you know a little more about how LED lights work, you may be wondering the best uses for them.

LED bulbs can be found in various shapes including recessed lighting as well as watts and lumens that have been converted for everyday uses. LED bulbs can replace a regular light fixture such as a lamp that has been burned out. They can also replace traditional bulbs in floodlights that light porches, driveways, patios, decks, and backyards.

You can also replace desk lights and reading lamps in your home office with LED lighting to provide better visibility.

An advantage of the LED bulb is that it uses thirteen to fifteen percent of the electricity that a standard light bulb uses. Traditional bulbs may last hundreds of hours, but a LED bulb lasts tens of thousands of hours.

A study was conducted at the Harvard School of Medicine to determine if there were benefits of using LED lighting in the workplace. It was shown in the results of the study that the workers were more alert, exhibited better performance, maintained a more positive mood, were able to concentrate better and were more alert by the end of the workday when they were working in an environment that was lit by LED blue-enriched white light.

LED lights oftentimes replace public space lighting and streetlights. This saves the costs of lighting public places for the local governments. More than just the cost efficiency, LED lighting is brighter than traditional lighting and is, therefore, safer as well. Communities that are using these to light their streets, parking lots, stadiums, parks, and other public locations are benefiting not only from significant energy savings but also a considerable reduction in crime because of the increased visibility.

It is becoming much more common for car manufacturers to use LED lights for the interior and exterior lights of the car. The LED bulb takes only milliseconds to respond, whereas the incandescent bulb takes several tenths of a second to illuminate fully. Although it could seem as if a few tenths of a second are not very important, when you are traveling at highway speed, you will travel ten to forty feet before the brake lights up. Therefore, LED brake lights provide increased safety, as they warn drivers quicker. This makes rear-end collisions less likely.

If you’re interested in learning more about the benefits of LED lighting or want to install LED lighting in your home or place of business, contact Brunelli Electrician! Give us a call at 508-400-5571 or fill out a contact form.